How Can You Move Ahead with Adult Ed? Adult education programs offer you an onramp to a better job and further education. We currently are providing instruction online and in person. CDC guidelines and sanitation protocols are in place for in-person instruction to ensure a safe learning environment.

For our English language learners, we offer levelled classes to learn English as well as ESLP, where we help certify overseas credentials for our internationally trained professionals. 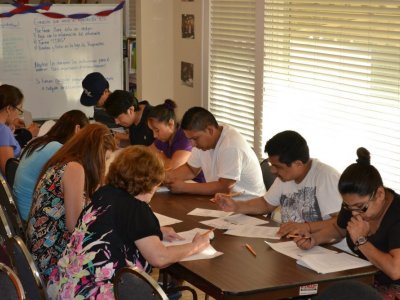 Jimmy has been an off and on student with the Arlington Reads High School Equivalency (formerly GED) program since 2014. By his own admission, he had many difficulties growing up and getting his diploma was always a goal of his, though it was a circuitous path which eventually brought him to Arlington Reads. Despite past and present difficulties, Jimmy stuck with it, never giving up!

He passed the Language Arts, Science and Social Studies tests fairly quickly but Math proved to be more difficult. It was almost a year and a half later, after passing his first three tests, that Jimmy passed math and earned his diploma.

"It was such a happy moment," Wilson said.

He hand-wrote thank you cards to all of the different volunteer teachers and staff that helped him along the way, and delivered them when he picked up his printed certificate. "I'm so thankful for everyone's help, I couldn't have done it without you guys."
What's next for Jimmy? Well, he plans on attending dental hygienist school through TCC.

"I also considered getting my real estate license, but becoming a dental hygienist seems like a more sure bet. I'm 45 and I'm starting a whole new life now."

Jimmy hopes that his difficulties and his positive personal growth will be inspirational to others. He's writing a memoir about his life, and is already over 10,000 words in.

"Life always has a way of getting in the way, but I hope that I can inspire others with my story."

Jimmy wants others to know that hope is alive and well, through Arlington Reads.

All information has been provided by this organization. Do you see outdated information? Please contact NLD Support.

Send Me This Information

This will send the program's contact information to your email or phone.